(Office of the Registrar)

Preamble:
Before he officially assumed duty on 4th November,2019, two main programmes; the 26th convocation ceremony of the institution and the institution's hosting of the Nigeria Polytechnic Games (NIPOGA) were fast approaching their schedule. The former event, the convocation ceremony was to hold barely a week after the new Rector assumed duty. The latter event, the NIPOGA was scheduled for between 8th -14th December, 2019. Realizing the importance of these two events, the new Rector set other official assignments aside and fully faced the two unique event ahead of the institution.

We are prepared for competitions

The Director of Special Project, Kwara State Polytechnic, Mr. Olowokere Abdulazeez Olayinka has assured the general public that the Kwara Poly Enterprise is ready to compete favourably with other competitors.

He stated this while speaking with Information Division Crew on the progress recorded so far in the last few months.

According to him, the resuscitation of the sachet water factory and purchasing of modern 2,000 capacity bottled water equipment have put the factory in a good position to compete farvourbly with existing operators.

Speaking further, on the level of preparedness of the Bottled water and Sachet water to hit the market, he said arrangement had been concluded to engage Private Operators to run the factories on partnership basis.

On the Polytechnic Bakery, Olowookere explained that with the 3-deck capacity fire back ovens, milling machine and experienced bakers, the sky is not even the limit to succeed.

The Director added that the factories would also be used as training grounds for students to acquire more skills and enable them to start their own after graduation adding that they will also serve as avenue for improving Internally Generated Revenue (IGR) for the Institution.

INSTITUTE OF FINANCE AND MANAGEMENT STUDIES

INSTITUTE OF INFORMATION AND COMMUNICATION TECHNOLOGY

A revolution in information and technology is ongoing in the Department of Computer Science of the Polytechnic with the e-pay roll, e-learning, e-conferencing, e-transcript, among others in recent time.

This was the submission of the Rector, Engr. Dr. Abdul Jimoh Muhammed during the exhibition of 2021 Students project and Annual Awards of the Department.

The Rector, emphasized that the transformation came at the right time when digital signal is in vogue, urging other departments in the Polytechnic to follow suit.

According to him, the e-payroll system is a web based upgraded payroll system for processing staff's monthly salary as well as sending digitalized pay slip via email while the e-conferencing is a hybrid where members of staff can participate in a conferences / meeting through both physical and electronic media.

Abdul added that the benefits of the system include efficiency, promoting flexibility, allowing for sharing and re-watching as well as enabling cost effectiveness.

He however, advised the Department of Computer Science to maintain the status quo and not to relent on its oar.

While challenging the Department to extend its scope of research, the Rector urged the Department to expedite actions on various software packages such as e-hostel allocation, e-finger print doors in hostels, e-hospital, which he noted would assist in the smooth running of the institution.

He also stressed that the e-learning software would facilitate distance learning for Polytechnics approved by the National Board for Technical Education (NBTE) as obtainable in the National Open University (NOUN) and other higher Institutions worldwide. He added that that the Office Automation and Security System via Bluetooth will involve the introduction of automatic control to certain electrical and electronic systems in a building, such as lighting, temperature control e.t.c using voice command or android phone.

This, he said, will not only reduce human efforts, but also save time and energy as well as provide home security and emergency system to be activated.

The highlight of the event was the presentation of merit awards to the Rector, Deputy Rector, Administration, Dr. Mrs. H.N. Adam, Deputy Rector, Academics, Dr. I.S. Adedoyin, the Registrar, Mr. Kolawole 'Sheye Akande, staff and students of the Department for their various contributions to the progress and development of Institute of Information and Communication Technology.

Responding on behalf of the awardees, the Registrar said the Department was brazing the trail with her various initiatives and pledged that the Management would keep supporting the Department with all its might to encourage the Department do more and serve as impetus for other departments of the Polytechnic. 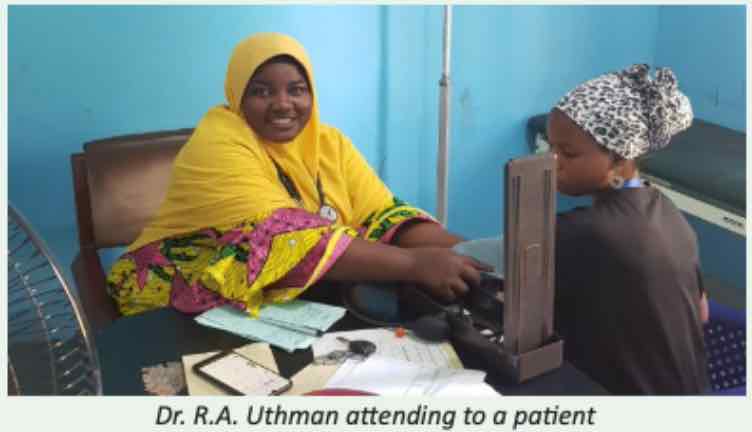 Health, according to the World Health Organization (WHO) is a state of complete physical, mental and social well-being and not merely the absence of disease or infirmity. Infact, WHO links health with well-being and conceptualize it as a human right that requires physical and social resources to achieve and maintain.

Based on the above assertion, the Abdul Jimoh Muhammed led administration in Kwara State Polytechnic, Ilorin, decided to take the bull by the horn by revitalizing the Polytechnic Medical Centre. The WHO concept of health moves the Rector to provide necessary equipment for effective out-patient and in-patient services for students, staff and members of the neighboring communities as part of the Institutions Corporate Social Responsibility (CSR).

The determination of the Rector to provide access to sound health for the Polytechnic Community geared the following initiatives: -